For women, it can be hard to relate to guy friends (and vice versa) – especially when there’s a little thing called biology separating the two of you. But fear not ladies, all of your unanswered questions about men have now been answered. Thanks to an insightful Reddit thread in which guys reveal the things women will (probably) never understand about them. 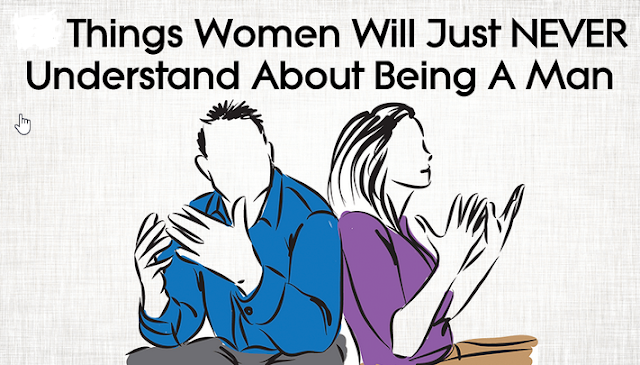 Below are some of them

In my experience, I’ve never chatted with the guys about a girl’s vagina. The fact that women sometimes or regularly talk about the dicks of a man they’ve been with, with their girlfriends, we don’t subscribe to discussions like that.

2. On scratching down there

The fact that we men scratch ourselves or re-adjust ourselves down below, doesn’t mean we’re trying to get sexual pleasures.

3. If you’re with kids, people assume you’re a pedophile

“That when I (a white guy) take my (black) nephews out to the park, I get looks from women that are the ‘He is a sexual predator.’ I have had police come up to me twice because women thought I was there planning on stealing someone’s kid even though I was there with my nephews.
Another time, I was walking with my nephews and a women came up to me, looked at them and said ‘Do you know this man’ they said yes and she said ‘Are you sure, he didn’t take you or is hurting you is he.’ This is something that I have heard other guys deal with too, not just myself”, said a Reddit user

4. Men live in a world where you are constantly unwanted, rejected, and outright feared, just for existing

Women complain about how they are constantly being objectified and desired by men all the time. Try a world where you are constantly unwanted, rejected, and outright feared, just for existing.

5. Women constantly attack us, and we’re not allowed to complain

“How helpless we are against the nasty mean looks, jokes, jabs and other subtle ways women attack us with. And on top of that, how society forces us to not complain about it.”

– “I’m listening, I just don’t have anything to add to the conversation.”

– “When I’m sitting and not saying anything I’m probably not mad. I’m probably just thinking about the technical aspects of riding dinosaurs or something else important.

7. We’re expected to be tough on the outside, but never sensitive on the inside

“Expected to be tough on the outside, but never sensitive on the inside since we’re not actually supposed to show weakness even when it’s called for

8. Rejection hurts and is embarrassing.

“We don’t drop off the face of the earth after you reject us because we are angry. We do it because rejection hurts and is quite embarrassing.

9. We don’t know what you want unless you tell us.

“We don’t know what you want unless you tell us. Romantically, sexually, emotionally, physically, hungerally, etc. Just…like, direct us a little bit.”

10. Guys can call each other the most appalling names and still be great friends.

“Shit talking. Guys can call each other the most appalling names and still be great friends. Try calling a female friend a ‘useless sack of shit’ and see how that works for you.”

11. Two guys can get into a fight and nearly immediately after become friends.

“The ability for two guys to get into a fight and nearly immediately after become friends. There’s a bond that gets built from punching someone in the face.”

“Just how much pressure we feel to be a man, not from women but from each other as well. The competitive nature we have with each other and how self-destructive it can be if we don’t feel like were accomplishing something. masculinity can be a real double-edged sword, and often times when your struggling with your problems I know from experience it feels like there isn’t a place to vent.
I feel like most men don’t even understand the problems inherent with our fucked-up culture of masculinity let alone women and men.”

13. We crave compliments, too.

“That as men we crave compliments. Nothing will make us happier then to be told we look good, smell good, etc.
This is why, I believe at least, why we men tend to compliment women too much sometimes. We sometimes over use the golden rule, we treat women as we want to be treated.
I have worked with some pretty attractive men who would get hit on often which was nothing for them but the second someone actually complimented them they lit up like a god damn gorgeous Christmas tree.”

“We didn’t choose the size of our dicks.”

15. We don’t care about what color your nails are, how you did your hair, or what new shoes you bought.

“No guys really care about what color your nails are, how you did your hair, or what new shoes you bought. It’s all the same to us. If we like you for you, the rest of that shit doesn’t matter.”

16. We are actually as emotional and sensitive as you.

“We are actually as emotional and sensitive as you, it’s just that societal norms dictate that we don’t express that lest we be emasculated.”

17. We’re always under pressure to be successful

“The requirement to be established. Have an established job, have a house, to be independent. It may just be because of my age but most of the girls I know prefer older guys because they are more likely to have aspects of their lives set up. I have no idea what my future is going to hold, but I keep that as quiet as I can.”

18. Rather than helping men and women get along, feminism subjects men to suspicion and outright derision.

“Being the subject of so much misinformation, suspicion and downright derision by people that should be the ones trying to help us the most.
Thanks, feminism.”

“We don’t know what you want unless you tell us. Romantically, sexually, emotionally, physically, hungrily, etc. Just… like, direct us a little bit.”

“It’s not so much the magnitude, as I’m sure it’s not actually worse than something like childbirth. It’s more the manifestation.

PS: These where originally posted by some Reddit users on this thread about what women will never understand about being a man, feel free to read more of them On Reddit