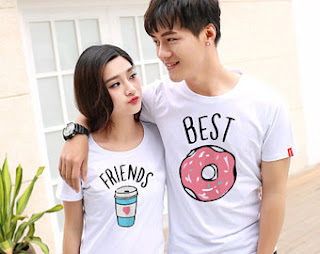 If you’ve used the phrase “Oh, he’s just my friend”, to describe a close acquaintance, you should listen up, for this post is meant for you.

The average lady would rather friend zone her male best friend  so hard, that they squeeze out all aspects of love that should have developed in the course of their friendship.

With your BFF as your romantic partner, you get the best of both worlds, someone with whom you can laugh, share your life and cuddle.


However, below are some of the reasons.

1. You both already have a lot in common:

Obviously there are a lot of shared interests which caused you both to meet up in the first place. Or, maybe it was a mutual friend who brought you together. Whatever it is, you know that a lot of your interests are aligned. If they weren’t, you would have hid him on Facebook the moment that feature becomes available. Especially if he’s somewhat of a social media over-sharer.

If you both bond over something, dates won’t be as hard to plan. For example, if you’re both psyched about the outdoors, a stroll will never be boring. If you both like music, you can always check to see who’s song tops the chart. A date can simply be an event you’ve wanted to check out anyway, and probably would have, regardless of your romantic status.

2. He knows all about your past relationships

Unless you just met him and bonded instantly, he’s probably seen — or at least heard about — your dating disasters of the past. And, likewise, you’ve probably heard about how his last girlfriend was possessive, or needy, or crazy, or in a secret cult, or all of the above. While these events may have been traumatizing for the both of you at the time, the positive spin is that you both know what doesn’t work in a relationship with the other person.

This is key in starting a happy and healthy new relationship. So, if he knows that you were dumped due to an ex’s cheating ways, he’ll obviously know that you’ll be ultra sensitive on the issue, and won’t even make jokes about the matter.

Meeting parents is massively stressful, but if this guy has hung around you enough, he’s already familiar with your mom and dad. And unless your parents ever pulled you aside with advice like, “I don’t trust this hooligan!” he already gets the parental seal of approval.

In fact, if you mention the relationship to your parents, you’ll probably get the response of “Finally!” or “It’s about time!” or “So when will we have grandkids?” And you might probably go off like, “One step at a time here, Dad/Mom.”

4. You’re already very comfortable around him:

It takes a few weeks to feel completely at ease with someone new but if you’re dating your bestie, you can skip all of that because you know each other so well and you can literally, blindly trust the other person because you know without a doubt that they will never break your trust or hurt you in any way, not even once would you think that your bestie would share your personal moments with someone else, that is the level of trust and comfort you both share.

Imagine a situation where in your loved one is from a different friend circle, it might become difficult for you to chill with them because the comfort levels are not that great but if you date your bestie who is from the same friend circle as you, the comfort levels are very high just simply because your friends are the same so, there is nothing to feel shy or uncomfortable about.

Let’s face it, we’ve all got one. He might joke about your gross (yet satisfying) nail biting habit, or he’s probably aware that one glass of wine too many makes you weirdly political in social settings.

When you’re dating, you’re just cringing over anticipation of the moment when these habits come to light. You’ll be wondering if whether or not eating scoopfuls of peanut butter from the jar will be his deal breaker, or making a lot of loud and disgusting sounds while brushing etc. Your best friend accepts you for you, and it’s such a good feeling.

7. You’ve helped been and helped each other through tough times:

Even best friends have fights, you may have hurt or insulted each other at some point in time, which you aren’t proud of so what, you both still managed to sort the situation out and still be together, you know each other’s insecurities and helped them get through it; this proves that you both will continue to do the same even when you’re dating.