LONDON — London and the South East, broadly speaking the UK’s most affluent regions, provide significant subsidies to the rest of the UK, according to figures released on Tuesday by the Office for National Statistics.

The regions bring in proportionately much higher tax revenues than they cost the government in terms of public spending per person.

All numbers are from the financial year ending in March 2016.

In every other region of the country, ONS figures showed, government spending is higher per person than tax revenues. This was most pronounced in Northern Ireland, where the net fiscal deficit per person — essentially the gap between tax revenues and public spending — was £5,440.

The chart below, tweeted by Financial Times Economics Editor Chris Giles on Tuesday morning, shows just how big the gap in tax/spending terms between London and the rest of the country truly is: 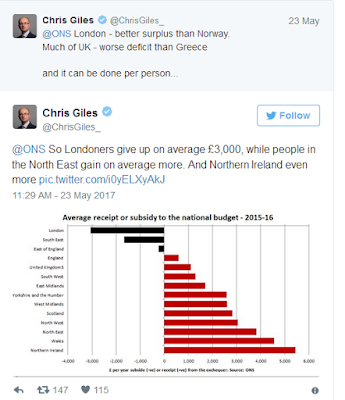 Overall, the ONS said, Britain borrowed £72.1 billion in the 2015-2016 financial year, equivalent to £1,108 per person.
ONS data on regional tax revenues and spending was released on Tuesday morning alongside wider figures for the UK’s total public sector net borrowing. Public sector net borrowing increased by £1.2 billion in April compared to the same time in 2016, the latest figures showed.

“Public sector net borrowing (excluding public sector banks) increased by £1.2 billion to £10.4 billion in April 2017, compared with April 2016; this is the highest April borrowing since 2014,” the ONS said in a data release.

Economists polled before the release forecast a deficit of £8.9 billion.
While on a monthly basis the deficit increased, the deficit fell on an annualised basis in the financial year ending in March compared to the end of March 2016.

That marks the lowest net borrowing in the UK since March 2008, just before the worst of the financial crisis hit the UK.