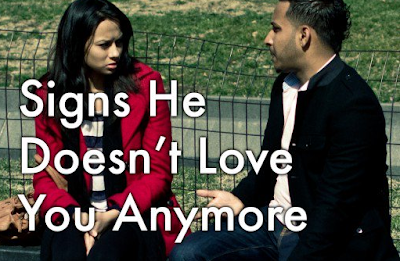 Does it feel like things just feel off lately. It doesn’t feel like he’s putting in as much energy, attention, and focus?
Maybe it feels awful when you’re together – like you can’t stop fighting and half the time you don’t even know what you’re fighting about. He is been acting weird like he is not that same person anymore?

Here are the signs that shows that he doesn’t love you anymore.

1. He frequently starts demanding for space

Your boyfriend really shouldn’t be asking for more space in your relationship if there have not been any changes in the way either of you behave. His demands to be left alone could be because he doesn’t enjoy being with you the same way that he did before.

Calmly ask your guy why he wants more space. If he says something specific, deal with it and get it over with. But if he says something vague and has no clear reasons why he suddenly wants you to take a step back, his love for you may be fizzling out.

2. He starts to compare you with other girls

A guy should never say something to a girl that makes her feel less beautiful, less talented, or less of a woman than someone else. The slightest hints of comparisons made between you and any other girl should be a warning sign.
Comparing your behavior, looks, or any other aspect of personality with another woman suggests a deep-rooted resentment driving a sense of frustration. Here are some examples of how a guy’s cruel words may mean that he is falling out of love with his girl:

3. He gets easily irritated by your actions

Love can make you feel weak in your knees but if that feeling fades away then he will start showing his true colors like he will get irritated in every situation and always find an issue in the small situation.

4. Your Boyfriend Suddenly Starts Getting Annoyed by Some of Your Habits

Has your boyfriend recently started pointing out little stuff in your everyday behavior, claiming that you annoy him endlessly? Ask yourself these questions if he suddenly feels that some of your habits are driving him crazy.

Make a mental note of whether you have had those habits since the beginning of your relationship. If you did, then why is your boyfriend suddenly becoming averse to them? Ask the same question to him. If he doesn’t have an answer for you, the real answer probably lies in his heart, which doesn’t beat for you anymore.

5. He doesn’t bother to console you even when you are sad.

A man who is in love will always recognize when his loved one is sad or in distress, and will do whatever it takes to bring a smile back to her face. This is true regardless of how much a couple fights or argues. No guy can call himself a boyfriend if he does nothing when he knows that something is bothering his girl.
Hugging a girl when she looks sad and rubbing her shoulders when she is down should be a boyfriend’s instincts. If your guy doesn’t do any of that and turns a blind eye even when you are feeling blue, it can be a sign that he doesn’t love you with the same intensity that he did before.

6. He’s Closed Himself Off From You And Stopped Sharing

You have to compare his current behavior to his past behavior for this sign.
If he used to be really open with you – talking about his feelings, or how his day went, or really anything that was on his mind – and now he’s become more closed off and aloof, it’s a bad sign.

If he was never really that open with you in the first place, then nothing really changed – and it’s not a sign that he doesn’t want to be with you anymore.

Also, this is another one that could be because of some external circumstance – if he’s having a problem he doesn’t think he can talk about he might close off rather than mention it.

But if he used to be open with you and now he’s stubborn and closed off, and he stays that way for a long time, it could mean that he doesn’t want to share himself with you anymore, which is a very bad sign for the future of the relationship.

7. He Really Tries To Hurt You When You’re Fighting

Everyone fights differently. One rule about successful couples is that they usually fight to solve a problem, instead of hurt each other.

That’s why it’s important to compare how you fight now to how you used to fight.
If fights in your relationship with him always eventually turned dirty and had one or both people saying mean things to each other, this isn’t such a big sign since nothing has really changed.

But if your fights used to be pretty reasonable, and have turned nasty, that’s a sign of a lot of negative emotions like anger and frustration about the relationship bubbling up in him, and that could definitely tear a relationship apart.

This is one of those signs where it’s up to you to decide what you want from the relationship.
Like I said before, this could just be him taking the relationship for granted and testing boundaries. If you make it clear that it’s not acceptable to you, he might shape up.

But if he shows no intentions of putting in more effort even after you make your needs clear, that’s a big sign that he’s not interested in doing what it takes to continue the relationship.