If you’ve flown before, I can bet my right balls that you’ve at one time thought of where your poop finally ends up when you flush it. Or perhaps, how the toilet on a modern aircraft work? Aircraft lavatories have come a long way since the early days of commercial air travel. Early flyers used slop buckets, and WWII pilots tossed piss-filled bottles out of unpressurized windows. 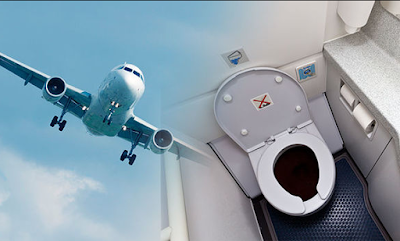 rain lavatories still adopts this method of poop landing directly on the ground when you flush, but we sure are not here[on this post] to talk about trains – so back to our planes.
Airplane toilet has a machine that goes to waste management system and here we will be explained how it goes. 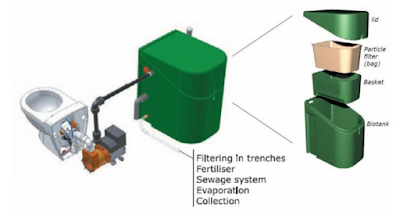 Airplane belly is just one of several tanks found inside the plane. These tanks get filled with waste, through the use of suction. Pressing the flush button in the airplane’s toilet is the first step of the process. Pressing that button opens a valve on the bottom of the bowl, which in turn exposes the contents of the bowl to a pneumatic vacuum.

The Suction and Holding Tank

There are two types of tanks in the plane – suction and holding tanks.The suction tank is the tank that the waste first lands the toilet is flushed. This tank can’t hold a lot of waste. When the suction tank filled, the holding tank then takes up from where it stopped, thus the name.

The brain behind the invention 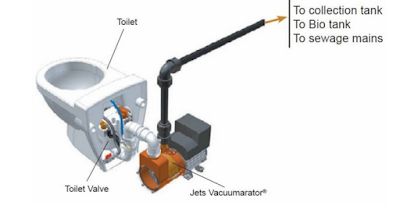 All innovators need to be remembered by name, and James Kemper is no different – he is the guy that invented the vacuum toilet system used in modern airplanes. He invented the system during the 1970s, with the system still being in use today.

The blue liquid used in the airplanes toiler system is called Skykem, and it works as a deodorant and purifying the waste. The liquid is non-sticky, which helps the suction process to properly “grab” all of the waste you drop in the toilet.

How The tanks Are Cleaned And Maintained 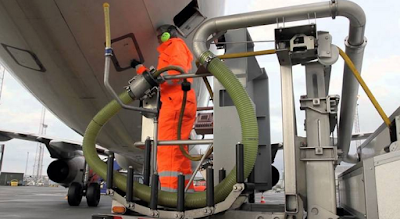 For every land the an airplane makes, there is always a crew with a lavatory service truck that hooks up with the tank and empties its content into the truck.
What happens to the excess waste that is poured into the truck? Unfortunately, that answer is a mystery.