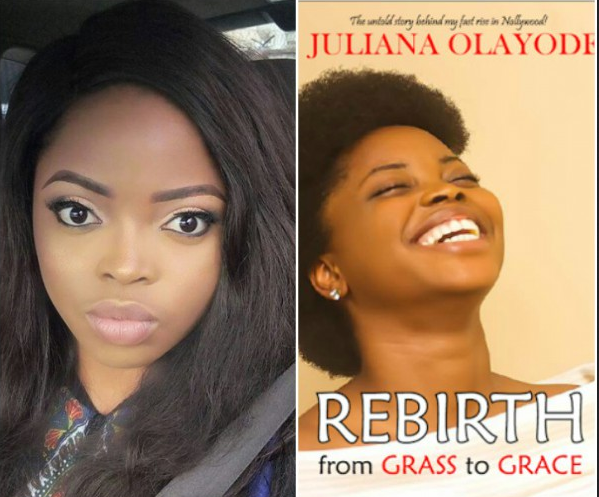 Funke’s Akindele’s Jenifa’s diary actress, Olayode Juliana popularly known as Toyo Baby, who recently released her autobiography has been slammed without reserve by disappointed fans for lying prior about being a virgin. To clear the air, she explained that people assumed that she was a virgin but she never corrected their assumptions.

“However, the fact that I had confessed to TiTiMi Adigun did not mean the world now knew. People had assumed I was a virgin. I had never said I was but I had never corrected their assumptions either. So, I was still in that fix. Shortly after my confession, Ebony Life TV called me for an interview. I went and for the first time in my several interviews, I was asked point blank if I was a virgin. I tried to evade the question, but my interviewer was not having it. She demanded for a yes or no. I did not see the question coming and I lied. I said, ‘Yes, I am a virgin’. Immediately the interview was over, I hurried to the bathroom in the studio and cried. I felt terrible for lying and told God I was sorry. I called Dee on my way home and confessed my wrong. I explained further when I got home.”

Toyo Baby also disclosed she would have confessed after her friend advised her to but she decided not to talk about again. She said:

“The next thing he said shocked me. He said, ‘Call her and confess the truth. Ask for a rescheduling of the interview; do it again and undo your mistake.’ I was not going to do that. I felt it was my secret and the whole world need not know about it. I was upset with myself, however, for answering her. I could have insisted I could not tell. So, I proposed never to answer such again. Easier said than done, right? Shortly after, I was on another TV interview, Crux Of The Matter, with Elsie. I was invited to talk for sexual purity while the other guest spoke against. In the process of the discussion, around the time when it was heated, I was asked out of the blues again if I was a virgin. And before I knew it, I heard myself lying again. I was mad at myself. I was on another TV interview that trended for a while. It was On The Couch, with Lady Ariyike. I talked about sexual purity, but thankfully I was not asked if I was virgin. After that one, I decided to stop interviews altogether. I was tired of lying or having to dread lying if I was asked straight up.”